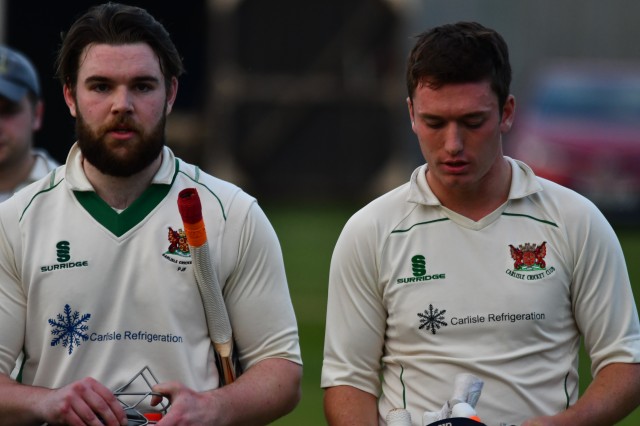 Carlisle had tailenders, Phil Frazer and Jimmy Bell to thank for a nail-biting, one wicket win at last season's champions, Workington.

The pair came together with the visitors reeling at 79-9 in their pursuit of Workington's below par 103 on an unpredictable early season surface affected by heavy recent rain.

Together, they nudged, edged and nurdled Carlisle closer to their target before Frazer heaved the third ball of the final over into the police station car park to secure the unlikeliest of victories.

Earlier, the game got off to the worst possible start for Workington, who had been asked to bat after losing the toss.

Liam Hazzard offered aggression in a calculated counter attack, but was forced off the field after dislocating his shoulder sprinting for a quick single.

Debutant, Fraser Conn gave Carlisle skipper Marc Brown control with a probing spell of medium pace as the home side struggled to generate any momentum before closing on 103 all out. Haider was the stand out bowler, finishing with 4-21.

After early wickets, a burst of belligerence from Brown, who twice lofted Sri Lankan Kaushalya Gajasinghe over the boundary, plus a well paced innings from Haider, appeared to give Carlisle a clear view of the home straight.

Gajasinghe's canny off-spin though appeared to have saved the game for the home side with three crucial wickets, before Frazer and Bell's last gasp heroics.